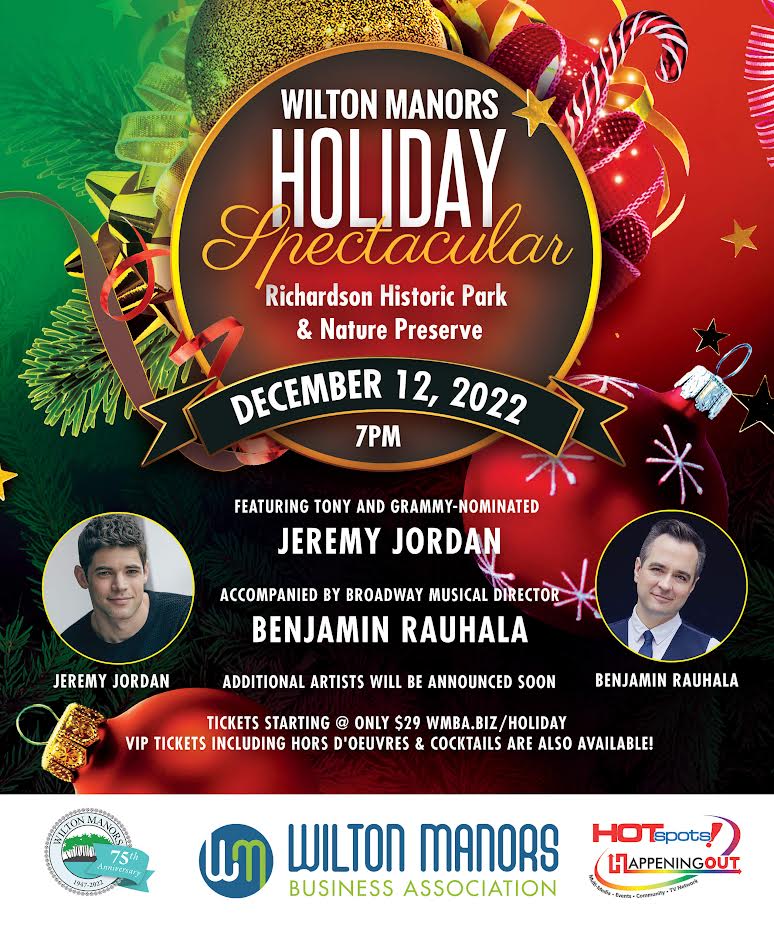 Join us as we welcome Tony & Grammy-Nominated Jeremy Jordan and Broadway Musical Director Benjamin Rauhala AND OTHERS (to be announced) at the party you don’t want to miss…Wilton Manors’ Holiday Spectacular. The event starts at 7PM (VIP access at 6PM).
Singing, dancing and acting come together with Broadway and Holiday…what a fabulous night! This annual event has become THE event to be at and we raised the bar again!

On top of great talent the delectable Chef Victor Lords has taken control of the VIP pre-event and he has some creations that you will want to indulge in. He also will feature some of the hottest bartenders you have ever seen!
General admission tickets start at only $29! VIP tickets which include access to heavy hors d’oeuvres and complimentary cocktails start at only $79. Order early and save as they will go up!

W﻿e look forward to celebrating the season with you!

JEREMY JORDAN is best known for his Tony and Grammy-nominated portrayal of Jack Kelly in Newsies on Broadway, as well as his many roles on television including series regulars on CW’s “Supergirl”, NBC’s “Smash” and Disney’s “Tangled.” Most recently, he starred as Seymour in the New York production of the iconic Little Shop of Horrors. Next up, Jeremy will star as the tenacious record industry giant, Neil Bogart, in the new feature film, Spinning Gold. Other films include The Last 5 Years opposite Anna Kendrick, Joyful Noise with Queen Latifah and Dolly Parton, American Son with Kerry Washington, and Newsies live on stage. Additional Broadway credits include Bonnie & Clyde (Theatre World Award), West Side Story, Waitress, American Son, and Rock of Ages. He has guest starred on numerous television shows, including “The Flash,” “Elementary” and “Law and Order: SVU.” Jeremy’s concerts and cabaret shows have won awards and acclaim worldwide. He is also the lead singer of “Age of Madness,” a new rock band which launched earlier this year. Follow @JeremyMJordan for all updates.

BENJAMIN RAUHALA is one of the Broadway community’s most trusted music directors and collaborators. He is the Music Supervisor, co-creator, of Disney Princess – The Concert, touring over 100 cities in North America throughout 2022. This past summer, he helped conceive and arrange the opening and closing numbers of the 2022 Tony Awards. Rauhala has toured the world since 2014 as the music director for Jeremy Jordan, the Tony-nominated star of Broadway’s Newsies and The CW’s Supergirl, and in 2020, he was named ‘Best Musical Director’ at the Broadway World Cabaret Awards. He is also the music director for Academy Award Winner Ariana DeBose, Halston star Krysta Rodriguez, Tony Award nominees Derek Klena, Jennifer Damiano, Kathryn Gallagher, Disney legend Jodi Benson, Anastasia standout Christy Altomare, and Smash star Andy Mientus. His Broadway credits include Fiddler on the Roof, American Psycho, and Pippin. His Off-Broadway credits include Hit List, the meta-musical from the NBC television show Smash, Duncan Sheik’s The Secret Life of Bees and David Byrne’s Joan of Arc: Into The Fire. He has created hundreds of sold-out concerts, including the Broadway Loves Series, that has internet-virally honored Celine Dion, Britney Spears, Demi Lovato, Selena Gomez, and many more beloved pop icons. His pronouns are he/him/his. Follow @brauhala for all updates